At LWF, we believe in modeling leadership worth following in all our activities, including our philanthropy. Each month, LWF invests a significant portion of our revenue to local, national, and global nonprofit organizations. Our team members also volunteer their time supporting these important causes.

Earlier this year, Marilyn Goerz Davis of LWF traveled to Central America to assist various organizations helping people traumatized by violence and crime, personal and family tragedies, and natural disasters. LWF funded travel and expenses for some facilitators and participants as part of our commitment to positively change the world. In this story, she describes training sessions given to community and church leaders in several different cities.

With all the opportunity to further the trauma healing work in Central America, I am very thankful for the financial support that enables me to contribute my efforts! The program I am promoting and delivering is “Healing the Wounds of Trauma,” from The Trauma Healing Alliance. This program based on sound mental-health principles and the Bible was designed so that people with any level of education could be equipped to help others in their communities heal from the disastrous effects of traumatic experiences. 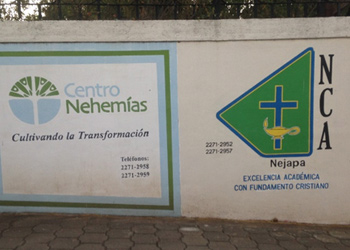 In January, I went to Managua, Nicaragua to work with Leanne Geisterfer of World Renew where we led a training workshop hosted by Centro Nehemías, a non-profit community development organization. We trained 36 community and church leaders to lead healing groups. All seemed motivated to apply what they learned. World Renew has since brought in a full-time worker specifically to support, encourage and mentor these trainees for a year. This should really help the ministry take off! Another initial training workshop is planned for April, and an advanced workshop will be offered in July to all who have completed their practice requirement. Others who have Training Facilitator certification can lead the initial training but a Master Facilitator is required to oversee the advanced training so I will likely go back then.

With the political situation in Nicaragua, there is general agreement that most people are traumatized and a desire for resources to help. I had been hesitant to go there but was reassured by receiving an official government approval to “lead a spiritual retreat” and reassurance from World Renew missionaries of the attention given to safety. Although the government has shut down human rights efforts, they are still willing to allow religious events. They recognize that the people are traumatized but attribute it to the “terrorists.” 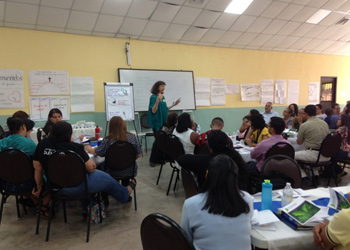 My next trip was to San Salvador where I was asked to lead an Advanced Training and mentor 2 Training Facilitators from Guatemala. We found those who had been through the Initial training lacked a clear understanding of the certification expectations. The Bible Society there had just hired a program manager for trauma healing whom I invited to the Initial training in Tegucigalpa so she would better understand the program. She attended and found it very helpful, which should enable her to support their program more effectively.

On February 16, I flew to Tegucigalpa where I first went back to Comayagua where we had done Initial Training in trauma healing in October 2017. Since not many of those trained had gone on to practice what they had learned, I met with 8 who expressed interest for a 1-day refresh workshop. Afterwards those who attended said they felt much more confident and prepared to put their learning into practice.

Next, I went back to Tegucigalpa to meet up with Marilyn Reeck, the SIL missionary I have worked with before, and Leanne Geisterfer of World Renew. We went on to a retreat center where we trained 36 people from various Honduran ministries. There was a waiting list of a dozen more for this training and we were encouraged by the strong interest. The Honduras Bible Society sent their Project Director who seemed quite impressed with the program and expressed a commitment to begin promoting it. This was a breakthrough, as previous efforts to get them involved had been unsuccessful. Receiving the training helped him understand that suffering trauma can create a barrier to God’s Word entering and transforming people’s hearts. 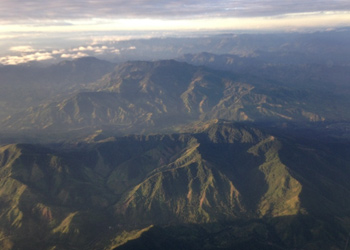 From Tegucigalpa, Marilyn Reeck and I flew to La Ceiba, where she lives and where we have done a good bit of trauma healing work in the last 2 years. There, we met with a group who had previously completed both Initial and Advanced Trauma Healing training, to encourage and continue mentoring them. We heard several stories of wonderful healing there due to the impact of the healing groups. Becky Fillpot, who with her husband leads a ministry to children and youth in one of the worst areas of town, plans to start community groups in 8 barrios beginning with trauma healing.

After final preparations, we flew to Puerto Lempira, a town in the La Mosquitia area only accessible by air or water. This is a beautiful but impoverished area, somewhat primitive, including terrible dirt roads, outhouses for many homes and at the church where we met, often no running water, and unreliable electricity except where people had their own generators. 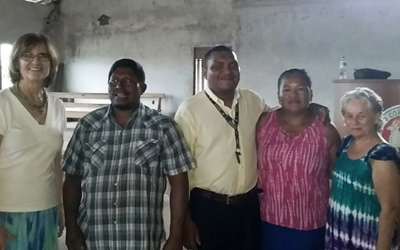 For the past year, two indigenous pastors and their wives, who had received the trauma healing program training in La Ceiba, worked on developing a story line for the trauma healing lessons that would resonate with the Miskito people, and had translated the materials needed for a story-based version of the program. We piloted this with 33 pastors and leaders of home churches from the area. The two indigenous pastor facilitators led most of the stories and discussion in Miskito while Marilyn R and I advised and presented some of the logistic lessons with one of them translating. Most participants had walked for hours from small towns to attend the week-long training. The Moravian church loaned us their large church building for our meetings. 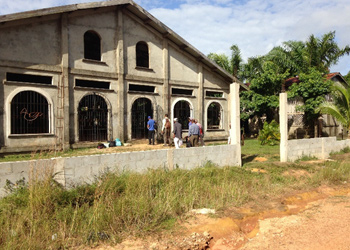 The pastors who promoted it said being able to bring this to their community was “a dream come true!” and the participants expressed immense gratitude for the healing experience and the training, as well as a commitment to begin healing groups in their churches and communities. It was beautiful to see God already at work healing the hearts of the attendees.

Pastor Ludy who lives there made arrangement for the participants to bunk in some open apartments and organized all the logistics. 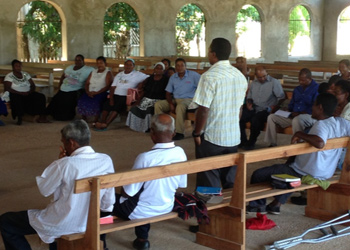 The pastor’s board house, elevated to catch the breeze. In the space below the house, you can see one of the smaller groups from the workshop learning to tell the stories. His wife and other women cooked all the meals and served them at their home.

This model of the program is designed so that they can lead it completely orally, since many in the area do not read and write well, and even pastors have few if any books besides their Bibles. Participants were given booklets with all the stories and activities as well as micro-SD cards with recorded stories that they could put in their cell phones. I had not known this was possible. We bought a few cell phones for those who did not have them to share by church or small town. They don’t even need to have phones activitated to use the recordings, which is great because many of them only buy minutes at convenience stores as they are able.

THANK YOU for providing this blessing to the people of Central America!